You might think that you get hungry simply as a result of being low in energy. Your body has used up whatever it could squeeze out of your last meal and is running on empty. But its not that simple. While low blood sugar levels do make us feel hungry, in our society hunger can often be more to do with your brain than your stomach. Its not a purely biological mechanism.There are social and psychological factors involved too.

WHAT HAPPENS: ‘Hunger sensations have a lot to do with learned habits about meal times,’ says Aston University psychologist Michael Green. ‘If it were a purely biological reaction, one would expect we’d get hungrier through the afternoon, but often if you skip lunch you can go past the time you normally eat lunch and not actually feel hungry.’
Researchers have also have confirmed that hunger pangs can be habitual rather than physically instinctive. ‘We associate certain time cues with eating, which means that simply arriving at those times can induce us to be hungry,’ says Dr Martin Yeomans, food bio¬psychologist at the University of Sussex. ‘You notice it’s, say, one o’clock, which triggers you to salivate and you feel even more ready to eat.’
HOW TO COMBAT IT: To get on top of any bad habits, get some good ones. Swap that desk drawer full of biscuits for a bowl of bananas and apples. If you always eat that mid-moming toasted sandwich, prove to yourself that you don’t have to. Ask yourself if you’re really hungry, or even rate your hunger on a scale of one to ten. Manage to do this for a week and you’ll soon have ingrained a new healthier habit.

WHAT HAPPENS: According to research from the Open University, another major psychological driving force behind feeling hungry is our anticipation of the pleasure we’re going to get from something like pizza or sirloin steak. This can be caused by the presence of food or even just thinking about it. You associate cues like the smell of food with feelings of post-meal satisfaction and that makes you want to eat,’ says Yeomans. You don’t wait until you’re hungry.’
Ever wondered why supermarkets pipe the aroma of bread into their stores or adverts stretch acres of melted mozzarella tantalisingly across your screen? Wonder no longer.
HOW TO COMBAT IT: There’s no denying it – ignoring the pestering of your imagination is hard. But you can take steps to help yourself. Don’t leave tasty food around your flat. Stay out of food shops, especially bakeries, unless you know exactly what you want. As soon as you find yourself salivating, burst the food bubble and clear your mind. Get busy with something else.

WHAT HAPPENS: Anyone who tries to eat healthily soon realises that many of the unhealthiest foods are the ones we really like. We humans have a natural evolutionary fondness for sweet foods. ‘There was an evolutionary advantage for us developing a preference for sweet foods,’ argues Yeomans. ‘Sweet tastes were always good to eat, while bitter things tended to be poisonous.’
As for liking fatty food, that’s thought to be down to our childhoods. ‘In breast milk we’re associating the fatty components of the flavour of breast milk with fat energy,’ Yeomans says.
‘Most of us develop a strong liking for fatty taste early in life because our bodies are generally physically hungry and we learn to associate these tastes with reduced hunger.’
HOW TO COMBAT IT: Don’t deny yourself all the time. Play to your tastes by substituting healthier versions of dishes you enjoy. ‘Look for low-fat versions of the things you regularly eat and add some fresh vegetables,’ says Amanda Wynne of the British Dietetic Association. ‘Even burgers and chips can be healthy – have a big whole meal bap, lots of salad and some homemade baked potato wedges.’ 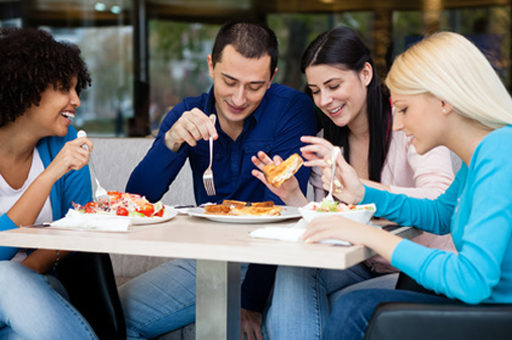 WHAT HAPPENS: Who you’re eating with and where you’re eating makes a large difference to how hungry you feel. Research from Georgia State University found that people eat 60 per cent more when out with their mates. Having an appetiser at a dinner party can increase your hunger – it starts your body’s preparatory systems early and that pre-emptive saliva makes the food look better than ever. Having too much choice is also likely help you pile on the pounds as your natural omnivore tendencies take the opportunity to stock up on the various foods. ‘We’ve got a sensory system that gets bored with one thing and promotes a varied diet, which is obviously important to an omnivore,’ says Yeomans.
HOW TO COMBAT IT: One way round these influences is to notice the pitfalls of eating out and decide whether to just go with it, fall off the health wagon for the sake of having fun with your friends, or politely decline. If you decide to lapse and forget your waistband for the night, don’t beat yourself up about it. Just try to keep it to a blip. Also try to avoid the instinctive ‘clean plate’ obsession that is often left over from your childhood. You don’t have to finish everything.
If you can’t resist or feel it’s rude not to clear your plate, simply ask for smaller portions. Or a doggy bag.

WHAT HAPPENS: Some people find that food takes a more serious role in their lives. ‘Food is often used in families in giving and withdrawing love,’ says Field. Busy parents give their children treats, such as cake, instead of time. ‘When the children grow up, they tend to comfort-eat because they feel good when they have something in their stomachs. It’s very much an aspect of nurture, warmth and love.’
HOW TO COMBAT IT: Field suggests that people who comfort-eat should think, Why am I eating this?’ Ask yourself whether you’re eating it because you’re hungry or because there’s something missing in your life, some other comfort you’re eating in lieu of,’ she says.